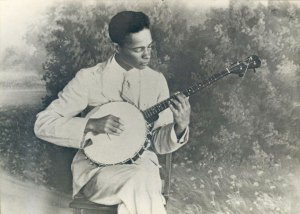 I was born in Paramaribo (Suriname) in a musical environment. My father Antonius Thomas Faverey was a self-taught classical guitarist (the main pioneer of classical guitar in Suriname) and also an amateur cello player. At the age of seven years I started my musical education on the violin. On my sixteenth I had my first guitar lessons with my father. After my secondary school I was lucky enough to get the possibility to continue my study with Manuel Sao- Marcos in Sao-Paulo (Brasil). After two intense years of study I got a scholarship to continue in Holland. During the first conservatory years I occasionally met Ton Koopman. After hearing me play baroque music on the guitar he stimulated me to study the lute. Beside classical guitar I started to study lute as a second instrument with Gusta Goldschmidt at the Sweelinck Conservatory. I am still enormously grateful with her for the enthusiastic lessons and her musical encouragement and for what I consider the most lucky musical period of those years. I had also master classes with Michael Schaeffer and Sigiswald Kuijken. During the Conservatory studies I formed a classic guitar duo with my compatriot Stanley Noordpool. For years we performed in Europe and in South America. In this period I was very involved with chamber music in different formations. A crucial moment of this period was the concert “Chitarra Bizzarra” in 1984 in Amsterdam, in which I performed in different formations with several members of the Royal Concertgebouw Orchestra, like Jaap van Zweden, Brian Pollard, Rien de Reede, Werner Herbers and with Machiko Takahashi. I also performed occasionaly with the most swinging flautist Ronald Snijders.

After my Sweelinck Conservatory degree I was appointed as a teacher of guitar at the Conservatories of Leeuwarden, Groningen and The Hague. I also taught guitar at the Muzerie in Zwolle. Because of my passion for Cuban guitar music I became a friend and great admirer of Leo Brouwer.

In the following years I studied Indian sarod and sitar besides guitar and lute. For some years I played the Brasilian bandolim in Choro emsemble (Vibraçoes). In 2001 I started to construct ethnical instruments like small percussion, shamisens, guimbries, ngonis and other string instruments. 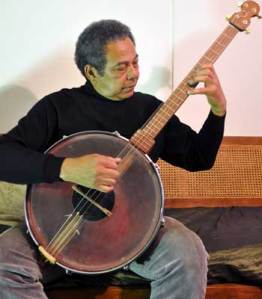 Some years after I got enthusiastic reading an article about the Stedman bania, the oldest banjo in the world, built in Suriname by a runaway slave in 1770, this instrument is exposed in the Museum voor Volkenkunde in Leiden. This is a gourd instrument, and is one of the ancestors of the banjo. Having constructed around 10 gourd banjos I started to built the follow ups of the banjo, like Minstrel banjo and Appalachian banjo. Experimenting with bigger sound chamber I used a floor tom and built my first fretless cello banjo. Being a baroque lute player I immediately put gut frets on the instrument and started to play some dances of the cello suites of Bach. More convenient however were the normal fretting which the luthier and restaurator Thomas Grabinger did so well for me.